Rapping has been one of the most influential careers in today’s world. The modern use of rap in the music industry was first introduced in the 1970s. It has been growing very efficiently. Rap music was not always accepted in this world. In the beginning, there were rappers who used to curse in their music, their lyrics were violent and disrespectful towards women and sometimes encouraged illegal drugs. With all the violent sides of rap music, it also has many rappers who point out the problems in society and influence children with their music.

There have been many famous rappers throughout the world. Some of them are Eminem, Dr. Dre, Snoop Dog, Nicki Minaj, Cardi B, Ice spice, and many others. Likewise, today we are going to talk about a female rapper named Ice Spice. Isis Gaston professionally known as Ice Spice is a famous American rapper.

Where was Ice Spice born?

On January 1, 2000, Ice Spice was born to Mr. and Mrs. Gaston in the Bronx with the real name Isis Gaston in The Bronx, New York City. She has not revealed any details about her mom and dad except that her dad worked as a former underground rapper. She grew up with 5 younger siblings in Fordham Road with her family. Her parents met each other at a McDonald’s and got divorced when Ice was 2 years old. She is of mixed ethnicity, African American and Dominican. While Ice was growing up, she used to spend a lot of time with her grandparent and cousins as her parents were busy working.

For her education, Ice went to a Catholic high school in Yonkers. When she was in school, she grew interested in hip-hop music after listening to many rappers including Lil’ Kim, and wrote poetry and freestyle rap.

What Are Ice Spice Career Peaks?

Ice Spice started writing poems and doing rap immediately after high school. However, she started her professional rapping career in 2021 along with producer Riot USA while they were attending the art college of The State University of New York at Purchase. Later she dropped out of the university and went on to produce her debut song called Bully. The single was released in March 2021. Ice released a video doing the Buss it Challenge that went viral on Twitter. Another song called Name of Love lead to traction on Soundcloud and made her famous on Instagram. 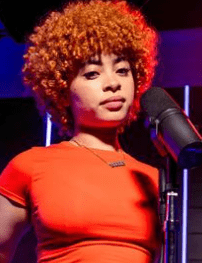 The following year, Ice released another song called Munch (Feelin’ U) along with producer Riot. The song was played by Drake on his Sirius XM radio station. The song went viral on every social media platform including TikTok and Twitter and went on to reach the chart of Billboard Hot R&B/ Hip Hop Songs. Her song also got listed on the Bubbling Under Hot 100 Chart. In September of the same year, Ice appeared on the song One Time by B-Lovee. Later she signed a record deal with 10k projects and capital records.

Who Is Ice Spice Dating?

Ice Spice is single yet as she has not confirmed any rumors about her boyfriend. Ice was linked with Caleb McLaughlin, an actor who is recognized for his appearance on the Netflix show Stranger Things. There were rumors of them having an affair however nothing has been confirmed.

Ice was also rumored of having a relationship with Canadian rapper Drake in September 2022. But both have not commented on these allegations. In October, her name was again linked with another rapper and singer Lil Tjay.

How Much Is Ice Spice Net Worth?

As of the wiki, Ice Spice has an estimated net worth of $2 million with her major source of income being a rapper. She has also appeared on several magazine covers as a model. Ice is a huge figure on social media and has 2.8 million followers on Instagram and 184k subscribers on her YouTube channel.

How Tall Is Ice Spice?

Ice Spice has a height of 5 feet and 6 inches and weighs around 58kg at the age of 23. She is a gorgeous and talented rapper with auburn colored hair and dark brown eyes.