Various prominent personalities have earned a name for themselves in different sectors as well as made their country proud on many international stages in recent years. However, we seldom see prominent people use their spotlight for good causes because they are frightened of being singled out by a specific group or receiving bad feedback, which might jeopardize their well-respected job. Rather, we still see exemplary superstars like Colin Kaepernick fighting for social equality while thinking about the welfare of the community.

Colin Kaepernick, also known by his real name, Colin Rand Kaepernick is an American football quarterback sportsman who plays as a free agent. Colin has been able to receive comprehensively recognized awards like 2X WAC Offensive Player of the Year for 2008 and 2010, and NFL titles like the Most Rushing yards by a quarterback in a game (181) and Most Rushing yards by a quarterback in a postseason (264). Similarly, many people may also signify the athlete as a civil rights activist who has fought against police brutality, racial inequality, and so on.

How Old Is Colin Kaepernick?

Colin Kaepernick’s birthday is on November 3, and he was born in 1987, in Milwaukee, Wisconsin, United States. So, his age is 34 years. Born on November 3, his zodiac sign is Scorpio and his nationality is American. Additionally, Colin belongs to mixed ethnicity (American, Ghanaian, Nigerian, and Ivorian ancestry) and follows Lutheranism as his religion.

Similarly, the sportsman was born to a 19-year-old white mother, Heidi Russo, and a father whose identity has remained undisclosed. Soon before the birth of Colin, his biological parents got separated, so, Heidi put him up for adoption when he was a 5-weeks old newborn baby. Thankfully, Colin was placed with a humble Caucasian couple, Rick and Teresa Kaepernick.

Steadily, newly adopted Kaepernick also formed a close bond with the duo’s biological son, Kyle, and daughter, Devon. Previously, the Kaepernick duo had suffered heartache after they lost their two biological kids; two other sons to heart defects, which is why they decided to adopt Colin in the first place. 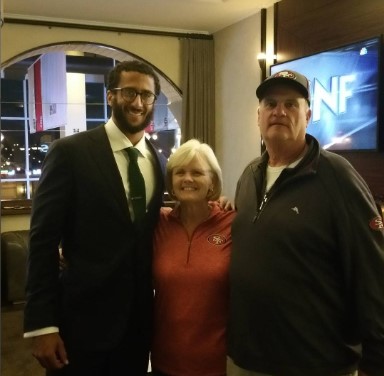 In contrast, along with his step-siblings, Colin was raised in Fond du Lac, Wisconsin, by his adoptive parents until the age of four. Afterward, the Kaepernicks relocated to California. Colin’s new family carried many efforts to make the athlete feel less different than others and Teresa was always open when it came to Colin’s adoption. Still, many of the player’s classmates would bully him or downgrade him telling him Rick and Teresa couldn't be his parents. Nonetheless, it seemed that little Kaepernick didn’t get bothered by the fact that he was a biracial child in a white household. Instead, without any hesitation, whenever he drew family pictures, he colored himself with brown crayons, whereas used yellow ones for his parents and siblings.

As per the academic training of Colin Kaepernick, he attended a comprehensive high school situated in Turlock, California called John H. Pitman High School. Later, he enrolled at the only college which offered him a football scholarship, the University of Nevada, Reno.

Who Is The Wife Of Colin Kaepernick?

The famous quarterback player, Colin Kaepernick is currently married to his long-term girlfriend, Nessa Diab, an MTV host and ‘Hot 97’ DJ by profession. Initially, the couple started dating in July 2015, but they made their first public appearance as a couple in February 2016, at a fundraising event. After being in a relationship with each other for more than 5 years, the duo finally held their wedding in 2020. Before being with Nessa, Kaepernick has dated many known personalities from December 2011 to December 2012, Colin was in a relationship with Corban Fennell. Afterward, he was reported to be together with model J. Marie Maestre from mid-2012 to 2013. Soon in May 2013, the athlete was seen having a romantic involvement with American adult model, Stacy Dazzle.

The rumors of Stacy and Colin’s breakup were never confirmed until he was seen moving on with American track field sportswoman, Micha Auzenne. The athlete duo dated from September and shortly broke up in 2013. Within 2 months of separation from Micha, Colin had a brief fling with 31-year-old Teyana Taylor in November 2013.

Moreover, in July 2014, it was confirmed that the football player was dating Brittany Renner, an author and fitness model by profession. Unlike his previous relationships, Kaepernick got wrapped in controversy while dating Brittany as the writer claimed that she was pregnant with her then boyfriend’s baby. Precisely Renner posted on her Instagram that she was “Preggers” by the athlete. The peculiar news was not confirmed by Colin, but soon after the incident, he uploaded the album cover of a rap song titled, “STOP LYIN” on his Instagram handle and captioned, “We just goin call this my anthem now! Keep trying”. Even though the specific name of Brittany wasn’t mentioned but the public was aware of whom Colin was referring.

The breakup of the messed up relationship between the player and author never made it to the headlines, but in October 2018, Jenner mentioned her ex-boyfriend and their affair details in her tell-all book called Judge This Cover. In contrast, Kaepernick has also been rumored to have dated Stephanie Santiago, Monica Hargrove, and Haitian personality, Hencha Voigt in past.

What Is The Net Worth Of Colin Kaepernick?

To begin with, Colin Kaepernick started his professional career after getting selected as the 36th overall pick in the 2nd round of the 2011 NFL Draft. Until today, the quarterback play has been able to possess victory against well-known teams like Baltimore Ravens, Green Bay Packers, New York jets, and so on. In addition, the athlete signed a contract with his new agency, ‘Select Sports Group’ in 2017. Also, he has his series released on Netflix in 2021 entitled “Colin in Black & White” which received a great response from the critics. As a civil rights activist, he is widely known for his ritual of kneeling during the national anthem during NFL games, relying upon it as a protest against police brutality and racial inequality in America. Undoubtedly, as a sportsman, Kaepernick is one of the most prominent ones and he has amassed a great chunk of fortune till today. Therefore, according to the wiki, the net worth of Colin Kaepernick is $20 million.

How Tall Is Colin Kaepernick?

The 34-year-old football champion, Colin Kaepernick has an athletic slim type he stands at the height of 6 feet 4 inches (1.93 m, 193 cm) and his weight is around 104 kg (230 lbs). Correspondingly, he has dark brown eyes and dark brown hair.