Is Brian Stelter From CNN Married? Who Is His Wife?

Home > Entertainment > Is Brian Stelter From CNN Married? Who Is His Wife?

Brian showed his interest in becoming a news reporter from a young age. To fulfill his childhood dream he joined The New York Times as a media reporter at the age of 22 just after graduating. But as we know everything has a life cycle, Brian’s career also met its end on August 18, 2022. Brian Stelter has decided to take a leave from CNN with a final episode on August 21, which means the network will end ‘Reliable Source’.

Is Brian Stelter From CNN Married?

Brian Stelter is a married man with children. He tied the knot with Jamie Shupak on February 22, 2014, in a Jewish ceremony wedding. Brian and Jamie are parents to two kids, a daughter, and a boy. Brian’s daughter Sunny Stelter was born in May 2017 and is now 5 years old and his son Story Moon Stelter was born in May 2019 and is 3 years old now. Jamie and Brian initially announced their kid’s arrival on their social media posts. The couple together with their kids live in the Lincoln Square neighborhood on the Upper West Side of Manhattan.

Discover: Who is Alex Wagner's Husband? Insight Into Her Married Life & Partner

Brian dated Nicole Lapin before he met his wife Jamie. Brian and his former girlfriend dated when Brian worked as NYT media reporter and Nicole worked as a CNBC anchor. While dating Nicole, Brian opted not to cover the news of CNBC and the NYT's media section editor Bruce Headlam also had agreed to his decision.

Find Out: Is WDRB Hannah Strong Married? Who Is Her Husband?

Who Is Brian Stelter’s Wife?

Brian Stelter and Jamie Shupak nee Stelter have been together since 2012 and are married for 8 years now. Brian’s wife Jamie is an outstanding journalist who has been nominated for an Emmy for on-air traffic anchoring on NY1 News in New York City. Jamie was born in Philadelphia where she got her early education and then enrolled at the University of Maryland and graduated in 2003. 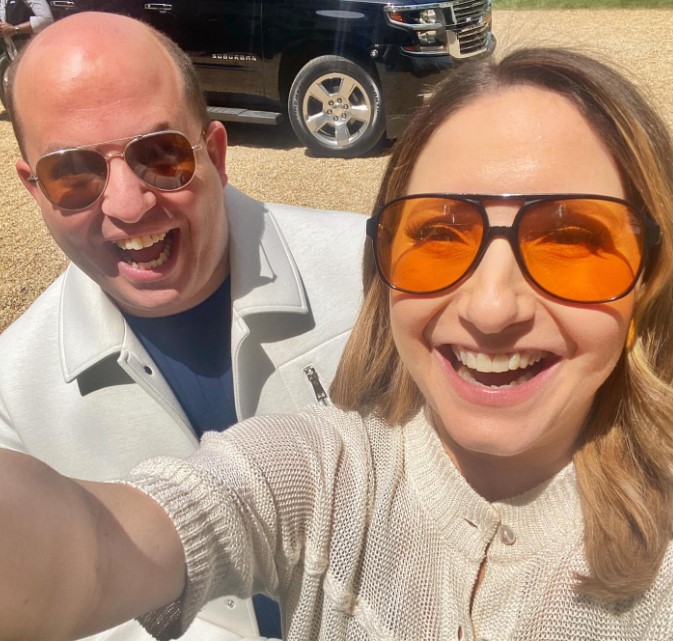 Just after graduating, Jamie debuted her traffic reporting job at News 12 Westchester, as a reporter and producer. Then in 2008, Jamie left News 12 and joined WTXF-FOX 29 and WNBC as a traffic reporter. Jamie wrote dating columns for Complex magazine and in 2013 Jamie Publisher a self-written novel called Transit Girl, which was slackly based on her life, how she overcame her cheating ex-fiancé, struggles she face when working as a transit reporter, and more.