Olivia Jade is a prominent media personality, content creator and YouTuber who has gained over 1.3 million followers on Instagram, around 1.83 million subscribers on her YouTube and around 300.6k followers on her TikTok.

Furthermore, Olivia is also known for being the daughter of American actress and producer Lori Loughlin and American fashion designer Mossimo Giannulli.

Olivia Jade was dating singer-songwriter and musician Jackson Guthy. Olivia and Jackson were linked together since early 2019 but they had an on-off relationship for nearly 2 years.

Initially, after the two were linked Olivia started featuring her boyfriend Jackson on her YouTube channel from February 2019. Later after the college scandal broke out, Olivia moved into Jackson’s Malibu home. However, they again called it a split in May 2019 as the backlash over the controversy continued but although they broke up Jackson was doing his best to remain “supportive”. 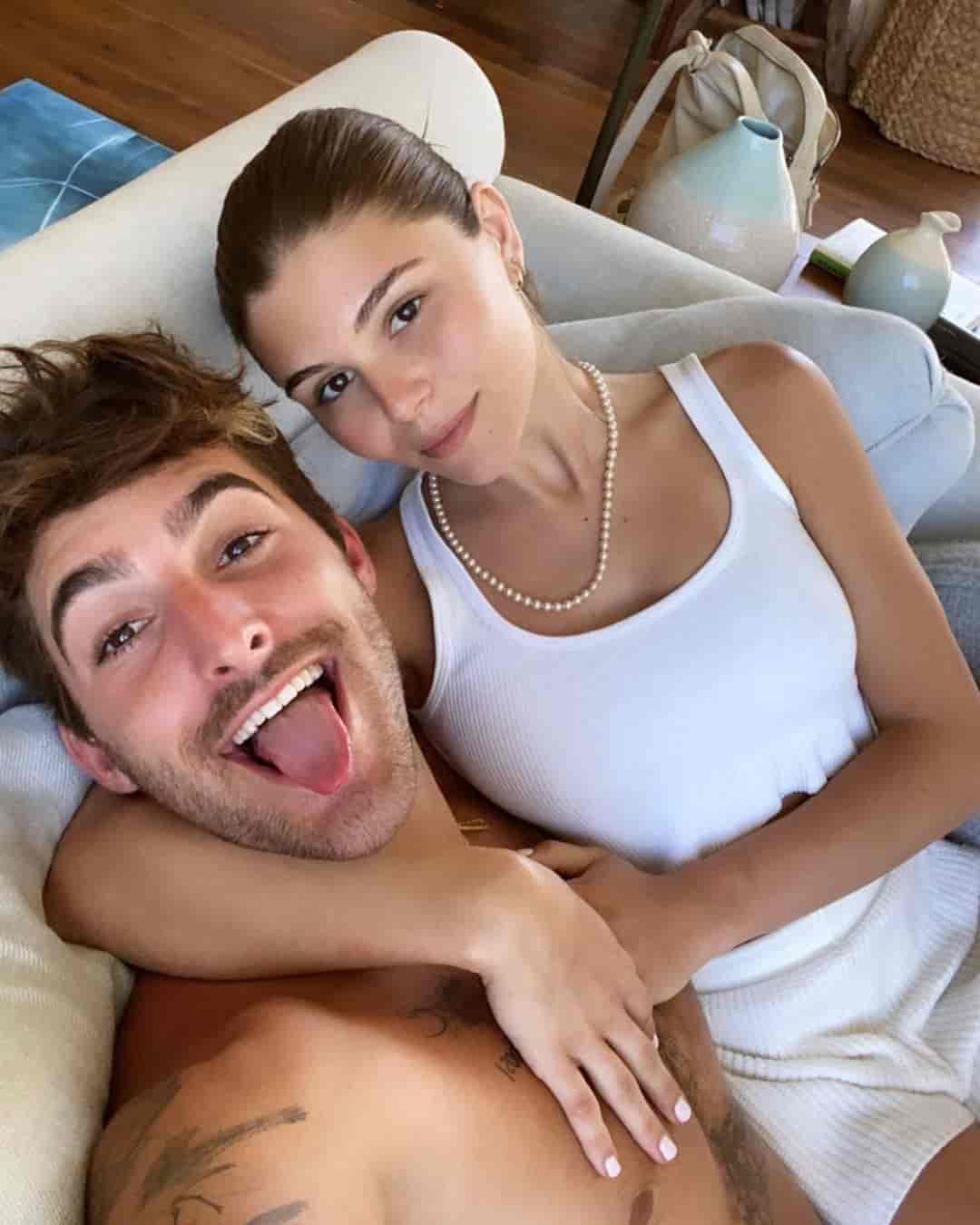 A month later of their split, Olivia and her partner Jackson were again spotted hanging out together in Los Angeles’ Sunset Boulevard. And by August 2019 they were back together and they even celebrated Valentine’s Day of 2020 together.

However, by August 2021 while answering fans asked Instagram Story Q&A Olivia again confirmed her being single which means the pair broke up again.

Olivia was not linked with any other until rumours swirled around about Olivia hooking up with her DWTS partner Val Chmerkovskiy. DWTS pro, Val is relishing a wonderful married life with his wife Jenna Johnson who is also the pro in DWTS. Later, Olivia cleared the rumours stating that she never hooked up with Val and they are really good friends and she even adores Val’s wife Jenna.

As of now YouTuber and social media personality Olivia seems to be single.

Olivia Jade was born on 28th September 1999 in Los Angeles, California, the USA to father Mossimo Giannulli and mother Lori Loughlin. Her father is an American fashion designer who is also the founder of the clothing company named Mossimo while her mom Lori is an American actress and producer. Talking about her education, Olivia went to the John Tomas Dye School of the Bel-Air area of Los Angeles from Kindergarten to 6th grade then she joined the Marlborough School where she studied till 9th grade. Later Olivia graduated from the Marymount high school in Los Angeles and after her graduation, Olivia was enrolled at the University of Southern California (USC) where her sister Isabella was also studying.

However, she and her sister both withdrew from the USC in the middle of the semester after the college admission bribery scandal. According to CNBC, Olivia and her sister remained enrolled at the University of Southern California as their parents face criminal charges. Prosecutors allege that her parents had paid $500,000 to have their two daughters labelled as recruits to the USC’s women’s rowing team even though neither is a rower or nor have they trained in the sport. Later, their parents surrendered to federal authorities in Los Angeles and her mom Lori was sentenced to spend 2 months behind bars while her dad Mossimo was sentenced to spend 5 months respectively and they even paid a total of $400,000 in fines as part of their plea deal.

Furthermore, talking about the height of Olivia, she is said to be around 5ft 4in tall (1.62m).

Olivia started creating videos for her YouTube channel since her high school days and soon became a social media influencer. She has over a million followers and subscribers on her social media pages. Olivia also receives various endorsements and does advertisements for various companies.

Being a famous social media influencer Olivia’s net worth is estimated to be around $1 million.

Additionally, Olivia is also participated in Dancing With The Stars (DWTS) season 30 where she is partnered with the DWTS pro, Valentin Chmerkovskiy (Val) but the pair got eliminated on 8th November 2021.