De'Andre James Hunter, also recognized as De'Andre Hunter is an American professional basketball player. He is currently playing for the Atlanta Hawks since 2019. He plays in the small forward position as the jersey no.12. Moreover, he was initially drafted in the 2019 National Basketball Association (NBA) draft by the Los Angeles Lakers on June 20, 2019.

De'Andre Hunter is one of those few people who always put their family first. NCCA (National Collegiate Athletic Association) Champion 2019, De'Andre Hunter was raised alongside his three siblings in his hometown. Here is an insight into his personal life as well as his professional career which has always been a matter of interest to the people.

What Is The Age Of De'Andre Hunter?

De'Andre Hunter was born as De'Andre James Hunter to a Christian family, in Philadelphia, Pennsylvania. He is 24 years old in terms of his age as he was born on 2 December 1997. So, being born in December, his Zodiac Sign is Sagittarius. Moreover, about Hunter's originality, he holds American nationality and compromises of African-American ethnicity.

Who Are De'Andre Hunter's Family Members?

Athlete De'Andre Hunter is the son of his father, Aaron Hunter Sr., and his mother, Priscilla Hunter. Moreover, about his parents, De'Andre lost his dad in 2005. At that particular period, De'Andre was seven years old. His dad was missing for two days and was found in the river. However, the cause behind the demise of his father is still unknown. Since then his mother became the strength of the family. 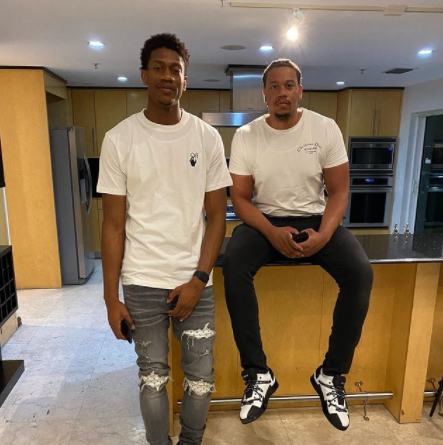 Furthermore, De'Andre was raised in North Philly alongside his siblings. His elder brother, Aaron Hunter Jr. took all the responsibilities of the family members after the demise of his father. In the meantime, Aaron Hunter Jr. was just 19 years old. Thus, this incident enhances the strong bond between the brothers. No matter what Aaron Hunter Jr. always supports his baby brother.

When Did De'Andre Hunter Start His Professional Career?

De'Andre was first introduced to basketball by his father, who was also a good player. So, in the honor of his father, De'Andre started his career in basketball and attended Friends' Central School where he averaged 23.5 points and 9.8 rebounds. Later, he got the opportunity to join Virginia because of the portrayal of his excellent skill. So, he grabbed the opportunity and committed to Virginia.

After committing to Virginia, he was redshirted due to his skinny body. However, he proved himself and was named 'ACC sixth man of the year'. Moreover, he started his professionally in 2019. He was drafted in the 2019 NBA draft alongside Kyle Guy, Ty Jerome, Cam Reddish, etc. Later he joined the Atlanta Hawks with a four-year contract in the same year 2019.

Who Is De'Andre Hunter Dating?

De'Andre Hunter has not spoken a word regarding his personal affairs and keeping his personal life confidential. There are no talks related to him dating or hooking up with someone. from the various sources, he neither has a girlfriend nor a wife at the moment as of 2021. However, it doesn't mean that he is not dating anyone secretly. So, we cannot jump to any conclusions but can only wish him luck for the days ahead.

What Is De'Andre Hunter's Salary?

According to sportrac.com, in 2019, De'Andre Hunter has signed a four-year contract with the Atlanta Hawks, guaranteed $32,101,641 that includes an annual average salary of $8,025,410. His income comes from being a professional basketball player. With no doubt, he has been living a lavish life. However, the net worth of De'Andre Hunter is not disclosed in the exact figures.

What Is The Height Of De'Andre Hunter?

Professional basketball player, De'Andre Hunter has a charming personality. According to the wiki, he stands tall with a decent height of 6 feet 8 inches or 2.03m and weighs about 221 lbs or 100 kg. Moreover, he has an athletic body type.