Mamadi Diakate has established himself well in the world of sports through his hard work and passion. He had left his home country and migrated to the United States in seeking opportunities to pursue his dream career. Hence, as of now, Mamadi is internationally known as a Guinean professional basketball player who is proudly representing his home country to the globe through basketball.

Mamadi Diakite is the former player of the Milwaukee Bucks of the National Basketball Association (NBA). Later, he was waived by the Oklahoma City Thunder. So, if you are wondering to know more about the prominent basketball player, Mamadi Diakite then you have reached the right place. Let's dig in to find out what's going on in Mamadi's personal life and professional career as well.

Where Was Mamadi Diakite Born?

In 1997, Mamadi Diakite was born in Conakry, Guinea to his parents, Aboubacar Sidiki Diakite, a health inspector journal, and Aminata Kaba Diakite, a professional obstetrician. He is 24 years old in terms of his age and celebrates his birthday on 21 January. So, being born in January, his zodiac sign is Aquarius. Moreover, as per his siblings, he has one sister Adama Diakite, and two brothers, Mohamed Lamine and Kaney.

Speaking about his childhood, Mamadi grew up playing soccer and football in the streets of his hometown. However, his father got concerned about him getting injuries while playing football. So, Mamadi's father made him switch to basketball which didn't turn out to be a bad decision. Furthermore, as per his originality, he holds Guinean nationality and belongs to the Muslim ethnicity.

Taking about the educational qualifications of Mamadi Diakite, he completed his primary education in his hometown. As he grew up, he got more interest in sports and he chose basketball as his prime career. So, he moved to the United States to achieve his dream career. Initially, he got difficulties in understanding the English language as he was only fluent in French, Maninka, Susu, and Fula.

After moving to the United States, Diakite joined Blue Ridge School in Saint George, Virginia where he played basketball for two seasons. After the completion of high school, he committed to the University of Virginia in 2016 but got debuted as a redshirt freshman to adapt to the environment of the university. While studying at the University of Virginia, he took a French major, Global Culture, and Commerce minor.

Dive Into: Kyle Guy Biography Including Details About His Married Life And Children

Who Is Mamadi Diakite Dating?

Mamadi Diakite has undoubtedly won millions of hearts of his fan through his amazing performances in the games. Thus, his fans are eagerly wanting to know about his personal affairs as well. However, Mamadi usually doesn't open up about the information related to his personal life. Hence, he hasn't shared anything associated either with his girlfriend on his social media. Moreover, he is less likely to be married and so he does not have a wife.

Forbye, we can only assume that Diakite is probably single at the moment. Though we can't deny the possibility of him dating someone secretly. However, looking back in his past history, he was spotted with his college sweetheart from the University of Virginia, Jasmine Moore in 2019. They were rumored to be dating but it is still unknown if they were dating or were just a friend.

Where Is Mamadi Diakite Now?

Mamadi Diakite withdrew his name from the 2020 NBA draft for his last season eligibility to the Virginia Cavaliers. After going undrafted, Mamadi signed a two-way contract with the Milwaukee Bucks. He was sent to make a debut in Lakeland Magic for accomplishing his G League part of the contract on 11 February 2021. Furthermore, he has signed a multi-year standard NBA contract in April 2021. 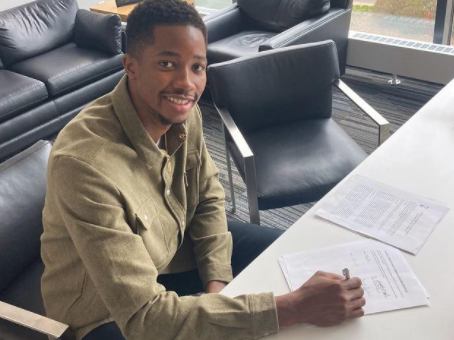 Afterward, Diakite was waived by the Oklahoma City Thunder (OKC) on 26 September 2021. Sadly, he fractured his left hip while competing to get the spot in the final thunder rooster against his former team. Thus, he had to back off due to his injury and missed his chances of being in that particular spot.

What Is The Net Worth Of Mamadi Diakite?

24 years old, Mamadi has summed up a decent amount of money through his hard work and dedication to his basketball career. According to sportrac.com, Mamadi Diakite has an average salary of $1,153,592, guaranteed $3,460,775 as he had signed a three-year contract with the Oklahoma City Thunder. So, he has been living a splendid life with his family. However, his net worth is not discovered in precise figures yet. 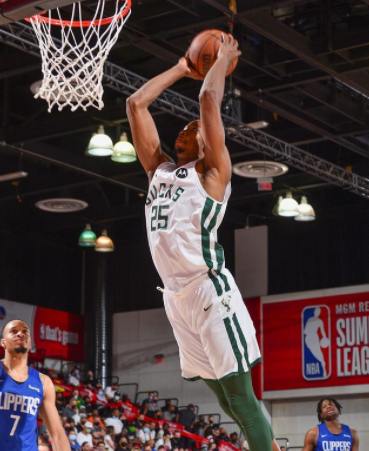 What Is The Height Of Mamadi Diakite?

According to the wiki, Mamadi Diakite stands tall with a height of about 6 feet 9 inches or 2.06 m and has a weight of about 228 lbs or 103 kg. He has an oval-shaped face with black-colored eyes and has dyed his hair golden. Thus, he is a handsome young man with an amazing personality. Additionally, he has also maintained his body pretty well and has an athletic body type.