Carson Wentz is an American professional football quarterback player who was first drafted by the Philadelphia Eagles in the 2016 NFL Draft.

He continued playing for the Philadelphia Eagles until the 2020 season as he was later traded to the Indianapolis Colts of the National Football League (NFL) in the 2021 season.

Carson Wentz tied the knot with his long-time girlfriend and best friend Madison Oberg on 15 July 2018. The duo was engaged back in February 2018 just a day after the Eagles took home their first Super Bowl victory against the New England Patriots. Their wedding ceremony was conducted at the Lake House Inn in East Rockhill Township in Bucks County, Pennsylvania.

You May Also Like: Nick Foles Is Father Of A Son & Daughter! His Married Life, Wife & Children

The duo initially provided an insight into their marriage by posting some photos and videos of their special day on Carson’s Twitter and on Instagram. Furthermore, as a professional American football player, Carson Wentz accumulates a net worth of about $45 million.

Moreover, Carson also film a show named “Wentz Brothers Outdoors” together with his elder brother Zach Wentz. Both Carson and his brother are fans of Winchester Ammunition and Firearms so, they hunt outdoor experiences and share them with the world with the TV show.

Carson Wentz was born on 30th December 1992 in Raleigh, North Carolina as a middle child to father Doug Wentz and mother Cathy Domers. His dad Doug was a linebacker at Northern State. When Carson was 3 years old, his family moved to Bismarck, North Dakota.

He has 2 brothers namely Zach Wentz (Elder brother) and Luke Wentz (Younger brother). Carson used to play baseball together with his brothers and tossed a football back and forth. 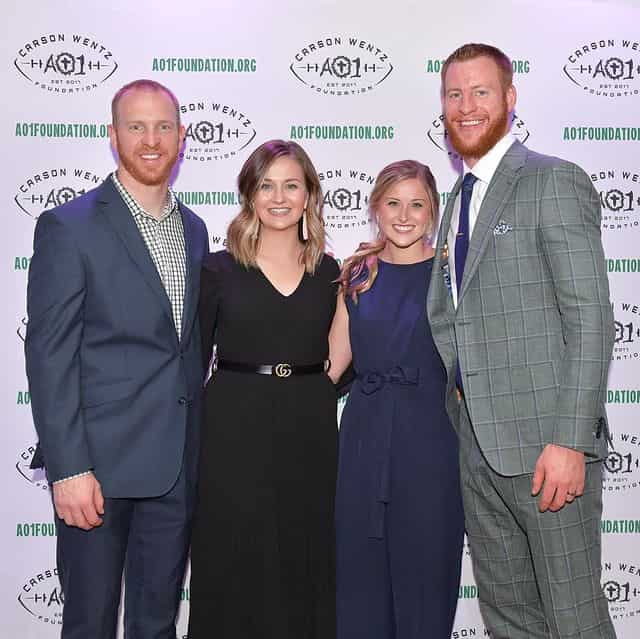 Growing up in the small state of North Dakota Carson attended Century High School of Bismarck and later went to North Dakota State University, Carson fell in love with the outdoors. During his high school days, Carson used to play as a quarterback and a defensive back for his high school football team.

He graduated from the North Dakota Stae University with a degree in health and physical education. During his university days, Carson also won the ‘Academic All-American of the Year,’ award by the ‘College Sports Information Directors of America twice which he first won for ‘Division I Football’ all ‘Division I’ sports.

His birth name is Carson James Wentz and he holds American nationality.

Talking about the height of the football player Carson, he is 6 ft 5 in tall which is around (1.96m).