Many of the viewers of reality shows believe it’s all scripted and fake. The reality show couple is only together during the show and split after a month or two. However, there are many examples of such couples who met their soulmate on these reality shows and now are together for more than a decade. Grace Adams Short and Mikey Dalton are an example, they met on the show Big Brother in 2006 and are still together married, and with three kids named Georgiana, Spencer, and Allegra.

Who Are Catherine Lowe’s Parents?

On April 26, 1986, Catherine Lowe was born as a Taurus to Carey Giudici and Cynthia Mejia-Giudici in Seattle, Washington, United States. Her father works as a social media coach and her mother is a Filipino historian. She grew up in Washington with her family and siblings; two sisters named India Giudici and Monica Teal Giudici. Catherine is of mixed ethnicity, Swiss-Italian and Scottish from her father’s side and a Filipino American from her mother’s side. Catherine went to Roosevelt High School for her early education and graduated in 2004. Later, she joined Washington State University and passed with a BA degree in Advertising.

What Does Catherine Lowe Do For A Living?

Catherine Lowe started her career as an advertiser for Seattle’s Wexley School for girls. Then worked as a graphic designer for Amazon and is a vegan food blogger. However, Catherine rose to fame after appearing on the reality show The Bachelor season 17 as a contestant. Sean Lowe proposed to Catherine on his season, which made her the celebrity of the show.

After appearing on The Bachelor, Catherine was a guest on Jimmy Kimmel Live! With her fiancé. Then she appeared on another reality show as a couple called Marriage Boot Camp: Reality Stars to resolve their marital issues. She also appeared on Billion Dollar Buyer season 3, an American reality show, and won a bid to sell products on LoweCo.

Who Is Catherine Lowe Married To?

Catherine Lowe is married to Sean Lowe. Her husband is a TV star and author. The duo met each other on the reality show The Bachelors of Sean. He proposed to her on the Bachelor’s set but got married on January 26, 2014, a year later of their engagement. The wedding was in a live ceremony performed by Sean’s dad at the four seasons resort Biltmore in Santa Barbara. 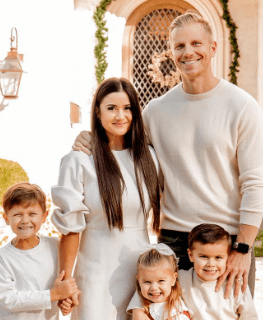 Catherine and Sean are proud parents of beautiful three kids. They welcomed their first son, Samuel Thomas Lowe on July 2, 2016. The second son Isiah Hendrix Lowe was born on May 18, 2018, and the third daughter Mia Mejia Lowe was born on December 23, 2019. And when asked in an interview if they are planning on their fourth child, they said it will be selfish moving knowing their kids now require the most attention right now.

How Much Is Catherine Lowe’s Net Worth?

As of the wiki, Catherine Lowe has an estimated net worth of $5 million. Her major source of income is from TV shows and her career as a graphic designer. Catherine also has promoted and endorsed many brands including McDonald’s and Suave Hair commercials. Catherine has a huge fan following on social media and has over 1.4 million followers on Instagram. She also owns goloweco.com, a card company.

How Tall Is Catherine Lowe?

Catherine Lowe has a height of 5 feet 3 inches and weighs around 54kg at the age of 36. Catherine is a gorgeous woman with black colored hair and dark brown eyes.