Sports can be appreciated by people of all ages and abilities. There are a wide variety of sports to choose from, and they can be played individually or in groups. One of the most played and liked sport is Football. Matthew Stafford is a prominent American Football player.

Who Was Matthew Stafford Born To?

On February 7, 1988, John Matthew Stafford was born to John and Margaret Stafford. He also has a younger sister, named Page. His parents had him in Tampa, Florida and later the family moved to Dallas, Texas. Matthew’s parents were very supportive of his sports journey.

His father was also an athlete, but his interest was swimming rather than football. Matthew’s father swam at Florida State University and became a graduate assistant coach at the University of Georgia. Later his dad John became head coach at Bolles and Florida state.

So yeah, it looks like the athletic skills run in the family. Stafford joined the University of Georgia for his High school and won several accolades as a member of the Georgia Bulldogs football team. Additionally, Matthew's zodiac sign is Aquarius.

What Are The Career Peaks Of Matthew Stafford?

Matthew Stafford has had a very pleasant statistical career in football. Matthew became a true quarterback in his freshman year, just after graduating from high school for the Georgia Bulldogs Football team. Stafford has played 39 matches in total, where he had 564 pass completions for 7731 passing yards, alongside 51 passing touchdowns, 141 rushing attempts for 213 rushing yards, and 6 rushing touchdowns. Later in his senior years, he decided not to compete but to prepare himself for the 2009 NFL draft. 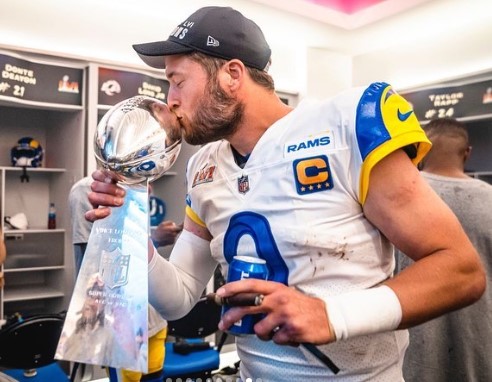 Matthew made his NFL debut in September 2009 against the New Orleans Saints. Later, on September 6, Lions head coach Jim Schwartz announced that Matthew will be playing as Lion’s quarterback. Stafford recorded his first win as a lion in the game opposite to Washington Redskins.

He approved for 241 yards and a touchdown in the 19-14 victory. He has been in contract with the Lions since 2009. Later in 2017, he renegotiated his contract with the lions and made an extension with $135 and $92 million guaranteed. As a result, he became the highest-paid NFL player in the history of all time. Matthew had hoped to bring a super bowl title to his city but had to move his career to the Los Angeles Rams. In 2022, Matthew Won his first super bowl with the Los Angeles Rams at the age of 34.

Who Is Matthew Stafford’s Wife?

Matthew Stafford married the sister of the retired NFL player Chad Hall, Kelly Hall. They met at a game where Kelly was cheerleading. Their wedding ceremony was conducted on April 4, 2015 in Atlanta, Georgia.

Together Matthew and his wife Kelly has four kids: Twins Chandler and Sawyer, born in March 2017, and daughter Hunter Hope, born in August 2018. Likewise, their youngest daughter Tyler Hall, born in June 2020. 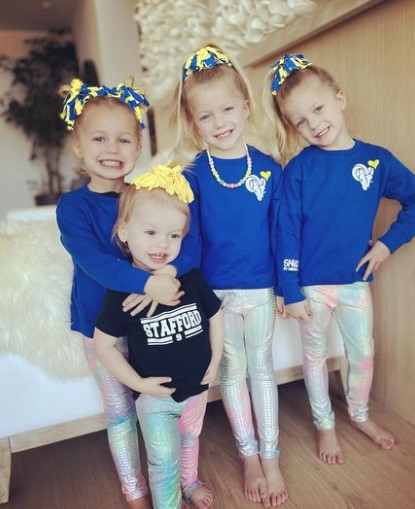 Matthew is not available on social media but he time and often make appearances in social media and connects with fans via his wife’s Instagram.

On 21 April 2019 Kelly Stafford posted on Instagram that she had a brain tumor and went to a 12-hour surgery on April 21. During this period Matthew took a break from the Lions to support his wife. Facing a problem such big can make you understand the pain, likewise, after going through such a devastating time Matthew gave $1 Million to the S.A.Y Detroit play center. 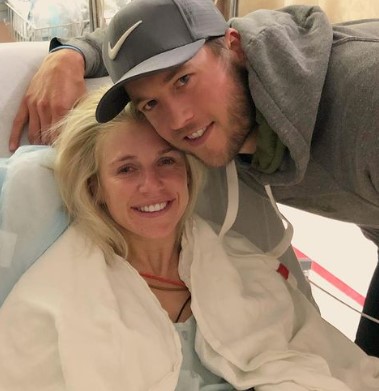 What Is Matthew Stafford’s Net Worth?

Matthew Stafford has a salary of $17 million per game and his net worth is estimated to be around $80 million. Stafford has a 12,000-square-foot mansion in Bloomfield Hills. The mansion has five bedrooms and a seven-bathroom with a large infinity pool in Michigan. They also happen to have a waterfall over the side of the mansion.

In 2016, Matthew and Kelly remodeled the mansion and listed it for $6.5 million in January 2021. Later he purchased a $19.6 million home in Hidden Hills, California. A year later he expanded his Hidden Hills footprint with $11 million purchased.

The couple acquire two of the three homes that earlier made Drake’s Yolo Estate. Matthew Stafford signed a 5-year contract with the Lions in 2017. This contract was the third in his career, his contract value is $135 million with a guarantee of $92 million, and received a signing bonus of $50 million. Matthew Stafford also has a wiki page dedicated to himself in the Wikipedia database.

How tall is Matthew Stafford?

Matthew has an athletic body type. He has a schedule that he follows daily. With a height of 6 ft 2 inches and a weight of 100kg, he is a proper sportsman. Stafford has dark brown hair and brown eyes.