As a kid, we must all have once thought that journalism is one of the most fascinating careers and yet so hard to carry on. It is not like most of the career that we see is easy but being a journalist is a career that is very hard and they are the one who collects the information through audio, video, and pictures and presents them in the form of news and disseminates to the public. Today we shall talk about one personality who is a great journalist none other than ‘Trey Yingst’.

Trey Yingst is an American journalist who works as a foreign correspondent for Fox News Based in Jerusalem, Israel. And he has reported from the Gaza Strip and around the Middle East while appearing on Fox News Programs.

How Old Is Trey Yingst?

Trey Yingst age is now 28 years who was born on the 10TH of September, 1993 in Hershey, Pennsylvania, US. And he was born and raised by his both parents father Jed Yingst and mother Debbie Lee Yingst who is also a kidney patient along with his twin sister named Aly Yingst who is also a Ph.D. student and works as a freelance writer, scuba instructor, Anthropologist and Expedition Guide. He is American by his nationality and his zodiac sign is Virgo. 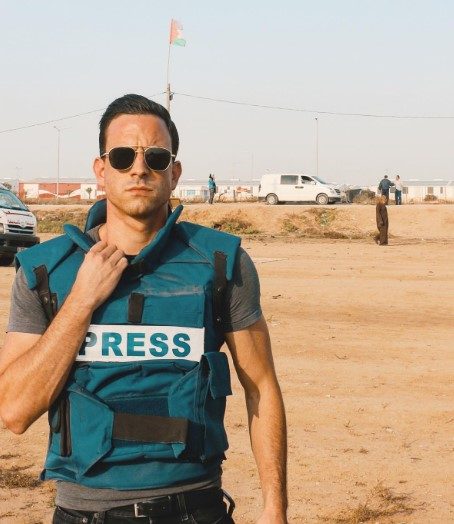 Where Did Trey Yingst Graduate From?

Since he was born in Harrisburg, Pennsylvania he there attended Central Dauphin High School, and back in 2016, he graduated from American University with a BA in Broadcast Journalism from the American University School of Communication in Washington D.C

When Did Trey Yingst Start His Career?

Trey Yingst started his career when he was still a student, he interned for five months from January to May 2014 at Japan’s national broadcasting organization, NHK back in 2014, and the same year he also interned for the Washington Post from September to December 2014. but his professional career began when he co-founded the outlet News2Share’, with his fellow American university student Ford Fischer back in August 2013. And back in 2016, he served as news director for the outlet where he reported on Warzones like Gaza, Ukraine, Rwanda, and Uganda. 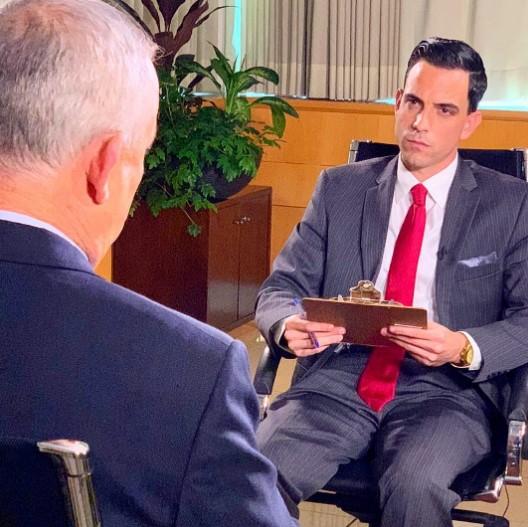 Hence, he went on to work for a variety of different news outlets including Canada’s CTV News and BBC News, he made national headlines when he reported on the protests against police brutality in Baltimore, Maryland, Ferguson, and Missouri. And back in June 2016, he left his all obligation when he joined One American News Network as the Chief White House Correspondent. During his time as chief he reported for President Donald Trump’s administration for about sixteen months.

And he has broken many stories like the indictment of the 13 Russian Nationals and three Russian companies on federal criminal charges for tampering with the 2016 presidential Election, and Iraqi Prime minister Haider al-Abadi’s plans to meet President Donald Trump. After his time on AON, he then joined the Fox News Channel’s International correspondent team back in August 2018. Since then he has been a foreign correspondent and a general assignment reporter based in Jerusalem, Iraq. During his time on the News Channel he has broken and covered many stories he was the first to report on the oil tanker smuggling Iranian oil to Syria, the tanker was sanctioned by the US government two weeks after the Fox News report was published.

He also covered the Bonito Queen back in 2019 and the same year in September he also reported exclusively on a secret Iranian base in Eastern Syria capable of storing precision-guided missiles. He has also reported amid rocket fire that occurred while he was live on the air and he was also interviewed by Mediate in March 2019. Likewise, he also attended the White House Correspondents Dinner, he has also interviewed Jared Kushner in Bahrain. He was also named to Forbes’ 30 Under 30 media list according to the wiki. It is very hard to carry on this career, especially since you may get injured while doing your job and he is doing very great building up his career till now.

Is Trey Yingst Dating Someone?

No, Trey is single for now but he was rumored to be dating Adi Spiegelman, a fashion model back in 2019. They were spotted together and captured in the frame by Getty Image when they attended the CBS News and Politico 2019 White House Correspondents Duner Pre-party at the Washington Hilton on 27th April 2019.

Trey even shared the red carpet pictures on his Instagram. Moreover, he often used to share pictures with his lady love mostly with the caption that read

Only serious half the time 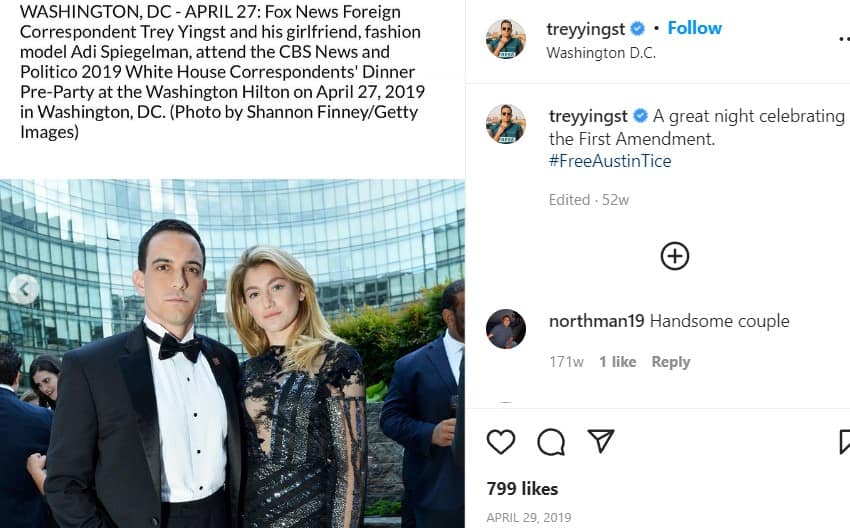 Although after their romance was red carpet official in 2019, they started to hang out less and later in 2021. With their growing distance rumors hit the surface that they parted their ways and his former girlfriend Adi had begun dating Julie Pacino who is a New York-based film director.

Nevertheless, Trey now no longer posts any pictures with his former partner Adi, instead, his Instagram is filled with pictures depicting his work. Although he seems to be completely career-oriented for now, his fans do wish to see him get married and have a wife and children.

What Is The Total Net Worth Of Trey Yingst?

Trey has been a very good journalist till now and has reported much vast news till now and Journalist being his main occupation and most of his salary comes from working in various News Outlet like Canada’s CTV News, BBC and recently in the Fox News and being the founder of the news director of the news outlet, News2share. He has been earning a good amount of wealth and the estimated amount of his net worth is $50k.

How Tall Is Trey Yingst?