6ft 5in tall Iman Shumpert is an American professional basketball player who was the NBA champion of 2016.

Iman Shumpert is the Mirror Ball champion of the Dancing With The Stars (DWTS) season 30 with his DWTS pro dancing partner  Daniella Karagach.

Here, let’s learn more about him all from his married life to kids, family and earnings.

Iman Shumpert tied the knot with American multitalented personality, Teyana Taylor, secretly in 2016. They first made their public appearance as a couple in September 2014 at the BET Hip Hop Awards. Almost a year later, in September 2015, Iman announced expecting a baby together via Instagram post. 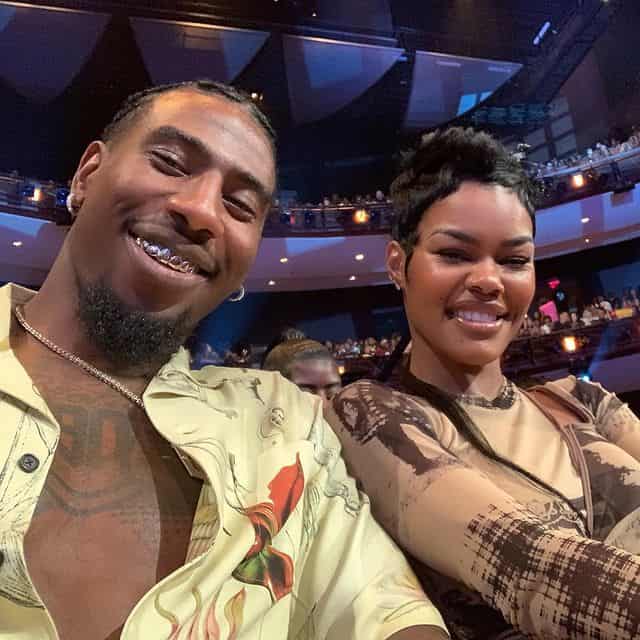 The pair then conducted a royal-themed baby shower for their first daughter to be born. Amid the celebration, Iman even made a surprise proposal to his lady love Teyana with a ruby engagement ring. Alongside the baby shower, the couple also got engaged in front of their family and friends. Less than a year later, the pair secretly got married. However, their married details weren’t made public until Teyana Taylor referred to Iman Shumpert as her husband on The Wendy William Show on 20th September 2016. Although not much is known about their wedding, it is said that they conducted their wedding on 1st October 2016 and prior to their wedding they got married in the bathroom where their daughter Junie was born.

The blissfully married couple Iman and his wife Teyana consider each other and their family as the biggest blessing of their life.

Furthermore, Iman’s wife Teyana is a professional American model, singer-songwriter, actress, dancer, director and choreographer who won BET Awards and BET Hip Hop Awards in 2020 for the category “video director of the year”. His dad Odis is said to be the president at Odis insurance agency, inc. while his mom L’Tanya is said to be an adjunct professor of art and design who served at Columbia College.

As per his siblings, Iman has 3 brothers: Ahrii Shumpert, Kasani Shumpert, and Odis Jr. Shumpert.

He went to Oak Park and then attended River Forest High School and graduated from Georgia Tech College in 2011.

Iman holds American nationality and he comprises of African-American ethnicity.

Likewise, on 30th January 2021, Iman signed a deal with the Brooklyn Nets of the NBA.

Furthermore, he is also the winner of the Dancing With The Stars (DWTS) Season 30 with his DWTS pro partner Daniella Karagach.