Home > Entertainment > Who Is Nick Kyrgios Dating? His Girlfriend, Family, Net Worth

Sports play a very crucial role in the enhancement of both mental and physical ability. Sports and sportspeople have their own physical and mental ability and each sportsperson is distinguished with their own skills.

Nick Kyris is one of the prominent sports personalities who is an Australian professional tennis player.

Nick started playing tennis just at the age of 6 and turned pro in 2012. Since turning pro, Nick has gathered 6 ATP titles and is the 6th highest ranked Australian in the current ATP ranking.

Alongside the thriving career of the right-handed, two-handed backhand tennis player Nick Kyrgios he has been linked with many girlfriends and has been in on-and-off relationships. Here Let’s find out about his current relationship with his past love life, family and earnings.

Nick Kyrgios recent relationship with his girlfriend Chiara Pasari had several twists. Their on-off relationship now seems to have come to an end. Nick and Chiara started dating back in July 2020. 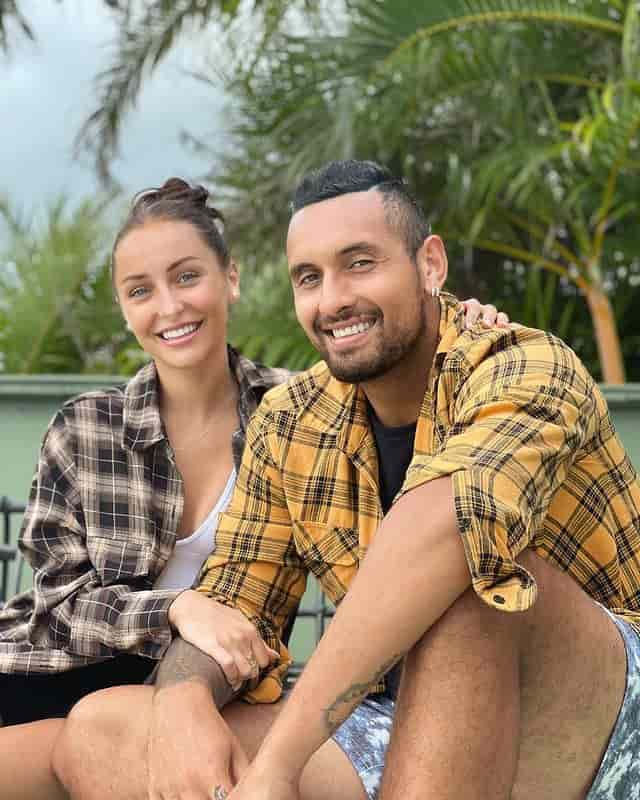 According to Dailymail, Nick and his girlfriend Chaira had a huge fight in September 2021 in hotel quarantine which resulted in cops being called in the scene. The dispute between the pair is said to have aroused after Chiara accused her boyfriend Nick of cheating on her. Furthermore, Chiara also confirmed being single after replying to one of her fans reply to her ‘Ask Me Anything” Instagram story.

As of now, their love story seems to have come to an end and the duo no longer follows each other on social media.

Prior to dating Chiara Pasari, Nick Kyrgios was in a relationship with tennis player Ajla Tomljanović. Nick and Ajla began dating each other in 2015 but the pair had an on-off relationship and they broke up in 2017. They split after Nick was pictured with 2 girls outside London nightclub in 2017.

After turning pro in 2012, Nick started his professional career at the 2012 Australian Open. Nick is former world junior no. 1 who has won the Australian Open boys singles titles in January 2013 with 3 Grand Slam doubles. Nick is also the first teenager in a Grand Slam event since 2005 after defeating world no.1 Rafael Nadal in the fourth round of the Wimbledon Championships in July 2014.

Nick Kyrgios was born on April 27, 1995, in Canberra, Australia to father Giorgos Kyrgios and mother Norlaila Kyrgios. His dad Giorgos is a Greek house painter while his mom Christos is a computer engineer. According to the Mamamia Daily, Nick’s mom Norlaila left her royal roots of the Pahang state (Malaysian royalty) and moved to Australia in her 20s with her mother.

According to the wiki, Nick is the 3rd child of his parents and he has 2 elder siblings, a sister named Halimah Kyrgios and a brother named Christos Kyrgios. His sister Halimah is a singer who was also part of The Voice Australia season 10 while his brother Christos is a fitness coach and trainer. His birth name is Nicholas Hilmy Kyrgios and he holds Australian nationality.

Nick went to Radford College but studied there only until his 8th year and later he gained a certificate from the Daramalan College of Canberra in 2012.

Nick Kyrgios stands at the height of about 6 ft 4 in which is around 1.93m.