Corinne is also known for producing the Netflix comedy series “Dad Stop Embarrassing Me” which is inspired by the real-life story of the relationship between Corinne and her dad Jamie Foxx.

Who Is Corinne Foxx Dating? Her Boyfriend And Love Life

To the delight of many fans, Corinne Foxx isn’t one to conceal to the extreme what goes on in her personal life as she documents them on her social media. She is in a blissful relationship with her boyfriend Joe Hooten. Joe first appeared on Corinne's Instagram in early July of 2019. Corinne Foxx seems to share a wonderful bond with her new partner, Joe, and the pair are often seen going outdoors and spending the weekends together.

You Might Want To Know: Who Is Corinne Foxx’s New Boyfriend Joseph (Joe) Hooten? Their Relationship Details!

Prior to him, Corinne Foxx was in a relationship with her college friend Austin Lantero. Corinne and her ex-boyfriend Austin met at the University of Southern California. They were supposedly together from the year 2015 and their relationship picture thread continued till the year 2018 so, the duo was speculated to break up each other in the same time period.

What Is The Net Worth Of Corinne Foxx?

Pursuing the footsteps of her father’s profession in showbiz, Corinne Foxx also made her name in the entertainment industry. Corinne made a cameo in The Jamie Foxx Show at the age of 6 and growing up she even used to serve as the date of her father on the red carpet.

In the year 2016, Corinne made her debut in the New York Fashion Week and even served as Miss Golden Globe.

She was a DJ and even co-hosted with her father in the second season of the American television musical game show, Beat Shazam.

Corinne has appeared in movies and television series like 47 Meters Down Uncaged, Safety, All-Star Weekend, Sweet/Vicious, Carpool Karaoke, Live in Front of a Studio Audience.

Corinne is also the producer of the American comedy television series “Dad Stop Embarrassing Me”.

With all the credits as an actress, model, producer, and DJ Corinne Foxx musters a net worth of about $11 million as of 2022.

Corinne Foxx was born on 15 February 1994 to mother Connie Kline and father Eric Marlon Bishop, popular with the stage name, Jamie Foxx. Corinne was born in Los Angeles, California with the birth name Corinne Marie Bishop. Her mother Connie used to serve for the US Air force as an air force veteran but now she works as an accountant at CK Financial. Her father Jamie Foxx is an award-winning, singer, actor, songwriter, television presenter, and comedian. Find Out: Who Is Margaret Qualley Dating Now? Boyfriend, Movies, Net Worth

As per Corinne’s siblings, she has a half-sister named Anelise Bishop who was born to father Jamie Foxx and mother Kristin Grannis, and another half-sister on her mother’s side. 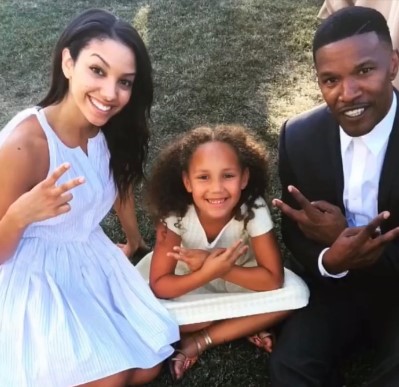 According to the wiki, Corinne went to Sierra Canyon School and later graduated from the University of Southern California with a degree in public relations. After that, she attended the Howard Fine Acting Studio and American Academy For Dramatic Arts in Los Angeles where she studied acting.

Corinne celebrates her birthday on 15th February and her zodiac sign is Aquarius.

WHO IS GRETCHEN CARLSON MARRIED TO? HER HUSBAND & NET WORTH